It is a truth universally acknowledged that the County of Hampshire is known as ‘Jane Austen Country’ and that the port city of Southampton is ‘Gateway to the World’. The Ageas ‘Rose Bowl’ Cricket Ground, home of Hampshire County Cricket, is not so universally well-known, but became the venue for the 61st Grand Chapitre of Chaîne GB.

By early October the cricket season had ended and the heavy rain over the weekend would certainly have stopped play. The official opening event, a Diner Amical, was held at ‘Beefy’s’ Restaurant in the shelter and comfort of the Hilton Hotel. After a delay of two years, another Grand Chapitre was underway.

The first visit of the weekend set sail the next morning. The Red Funnel Ferry. passed cruise liners, tankers, container ships and pleasure crafts as it ploughed its way across the Solent to Cowes, the renowned centre of sailing on the Isle of Wight. Osborne House, the Italianate holiday home of Queen Victoria and Prince Albert, was the tour’s destination and an excellent overview of its history was delivered, enroute, by the Bailli of Solent, Andrew Crawford - an unexpected bonus. It was easy to see why the house, with its own extensive grounds and peaceful bay, became a precious royal retreat. Before the return ferry, there was a welcome stop for lunch at The Lifeboat restaurant. Few diners will forget the dessert: a rich and royal portion of moist chocolate gateau.

The Harbour Hotel was the host for that evening’s Welcome Dinner. Started with Ridgeview’s Bloomsbury Brut and followed by one of Michelin Starred chef Alex Aitken’s delightful seafood-based dinners – six light courses with six superb matching wines. Suddenly it was nearly midnight! Our thanks to GM Maître Hotelier Lukasz Dwornik and all of Alex’s team.

For more photos of the 61st Grand Chapitre visit the gallery.

The following morning an exceptionally busy Induction Ceremony was presided over by Bailli Délégué, Philip Evins and International Vice-President, Marie Jones. After reception drinks, weekend guests then spent the afternoon in various ways. Some visited Stonehenge - perhaps the world’s most famous prehistoric World Heritage monument - and Salisbury Cathedral, founded in 1220 and best known for its incomparable tower and spire, the tallest in England. Both ‘shone’ even on this wettest of afternoons and both visits were guided and enhanced by the expert knowledge of Cathedral Guide Officier Alex Armstrong.

Despite, the howling wind and thrashing rain, a group of members spent a fascinating afternoon (mostly inside) at the Hambledon Winery. Hambledon is England’s oldest commercial vineyard, dating from 1952. At a banquet in Paris in 1973, Her Majesty Queen Elizabeth served Hambledon wine to President Pompidou, upon Britain’s entrance to the EEC, enabled by the late Professional du Vin, Steven Spurrier. Passing to Ian Kellett in 1999, the estate continued in this pioneering spirit: installing the first Coquard press in the UK - instrumental in the production of quality sparkling wines. From its two hundred acres Hambledon produces upwards of 150,000 world class, classic method, sparkling bottles per year, using the same noble grapes varieties as Champagne. Three expressions were tasted all of which had a purity of fruit, driven by energetic effervescence. Bottles were purchased and loaded up before it was time to head back to prepare for the Gala Dinner.

Meanwhile a group of Wessex members led by Jill Welsh was busy arranging sapphire blue hydrangeas and foliage into beautiful centre pieces for the tables in the California Suite at The Vineyard Hotel at Stockcross. The stage was set for the Gala Dinner – a dinner which was simply superb. There were audible gasps of admiration as each deft, delicious course arrived. The accompanying wines were from around the globe. Old friends were reunited, new friends were made and the close harmony songs, 40’s style, of The Spitfire Sisters cabaret added to the upbeat atmosphere. Congratulations, very well-earned, went to Maître Rôtisseur Tom Scade, Maître Sommelier Romain Bourger and General Manager, Paul Shannon and their excellent teams.

As customary, a raffle was held in aid of The Clink, Chaîne GB’s chosen charity. The aim of The Clink is to reduce reoffending rates by training prisoners and placing graduates in employment in the hospitality and horticultural industries. One of the prize winners was Denise Haverty. She and a friend subsequently spent a happy 24 hours at The Vineyard celebrating a birthday and enjoying “a really brilliant raffle prize,” with an à la carte dinner, a Sommelier-recommended choice of wines, and time in the Spa.

Photos from the Gala Dinner, The Vineyard:

For more photos of the 61st Grand Chapitre visit the gallery.

And so, to the final event of the weekend – a Lunch Amical at The Blue Jasmine restaurant on the harbour front in Southampton where we were welcomed by the owners, Maître Restarateurs Xi and Danwei Zhao and Assistant GM William Tan.

Designed by Maître Rôtisseur Darren Liew this was a feast of Southeast Asian cuisine – all freshly, and beautifully served in elegant surroundings. Seventy two hours in the making and using ancient methods, the Sarawak black pepper roasted duck alone demonstrated the passion, care and precision infused into each part of this evocative menu. The golden Mango Botanic dessert served with Sauska, Tokaji Aszu, 5 Puttanyos 2013 and the joyful group photographs brought this Sunday lunch to a happy end. And for just a short while the sun shone.

For all the detail of organization, for all the wonderful organizers, volunteers, and attendees, there was still one vital ingredient missing from this Grand Chapitre - the dynamism of international members and their guests. There will be a warm welcome back for sure in Autumn 2022, when the 62nd Grand Chapitre takes place in the renowned University City of Oxford. Come rain or ‘shine! 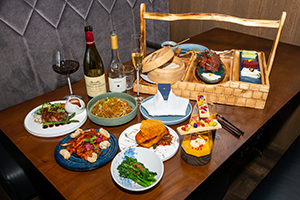 Lunch Amical at The Blue Jasmine 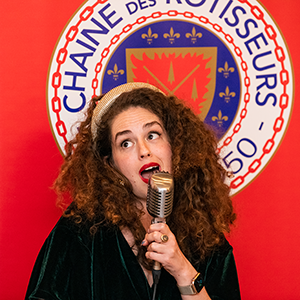 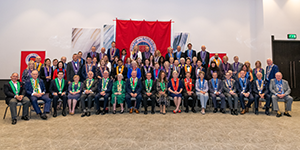 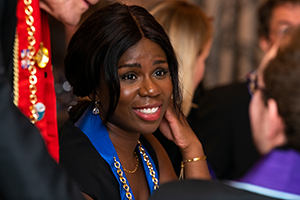 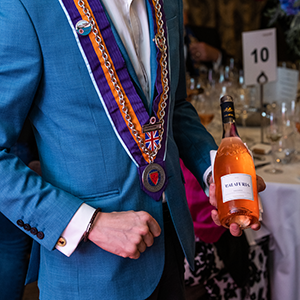 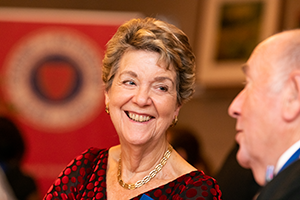 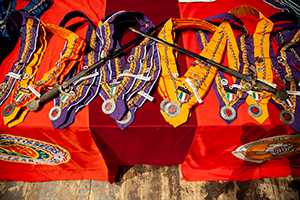 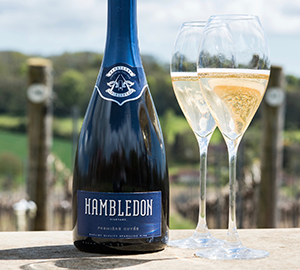