Some 350 Chaîne members from over 20 countries around the world descended on London in early October to share in the celebrations of Chaîne GB’s 60th Anniversary and to help mark this occasion as something special to be remembered. An informal start with lunch at The Clink restaurant in Brixton Prison, where we were welcomed by CEO Chris Moore, brought people together. This restaurant produces Michelin standard food with many ingredients from The Clink gardens and is staffed by serving prisoners under training.

The official programme was launched with a Dîner Amical on the River Thames in the Bateaux London’s ‘Glass Room’ boat. Diners could view the many illuminated iconic buildings situated along the banks of the Thames on a journey from Westminster to the Thames Barrage and back, whilst greeting old friends and making new acquaintances.A four-course dinner prepared by Maître Rôtisseur Emeline Gibert was served to live jazz entertainment.

A visit to the historic home of Henry VIII at Hampton Court Palace was very popular the following day. Experienced guides in costume gave a tour of the Great Hall, the Royal Chapel, Royal Apartments, Cumberland Art Galleries and the kitchens and wine cellars. This was followed by a much acclaimed lunch at The Wharf on Teddington Lock.

That evening the Welcome Dinner was held in the magnificent surroundings of the Fishmongers’ Hall. The Worshipful Company of Fishmongers is a senior livery company of the City of London, with nearly 750 years of continuous operation having been formed in 1272. It was a fitting venue for the Chaîne des Rôtisseurs. The Drinks Reception was held in the Court Room overlooking the Thames, which is graced by the world famous Pietro Anigonni painting of the Queen, before moving into the exquisite Banqueting Hall for dinner. A warm welcome was given to Inducting Officer, Carl Wachtmeister, Bailli Délégué of Sweden and his wife, Anna and many others, including ‘regulars’ to these events. Head Chef, Maître Rôtisseur Stefan Pini, has the reputation of cooking one of the best Guild dinners in the City and so it was no surprise that he created a sumptuous menu but, most impressive of all, was that he could serve perfectly cooked food (and especially the rack of lamb) for over 200 people. The food, wines and service were difficult to fault.

The Induction Ceremony was held on Saturday morning at the beautiful Holy Trinity Church, Sloane Street known as the Arts & Crafts Cathedral of London. Before the ceremony began, Father Nicholas Wheeler welcomed everyone and gave a historical background of the church. Inducting Officer, Carl Wachtmeister officiated. Reception drinks at the end of the ceremony gave new members a chance to get to know each other. Other members spent the day visiting Sir Winston Churchill’s home at Chartwell in the Kent countryside, gaining a personal insight into his family life. The visit included his painting studio which looked much as it would have done when Churchill was working there. Others visited the Beefeater Gin Distillery or enjoyed a Chocolate Workshop given by Master Chocolatier, William Curley.

That evening some 300 members attended the Gala Dinner held in the Nine Kings Suite at the splendidly refurbished Royal Lancaster Hotel – the host hotel for the Chapitre. Guests had a photo opportunity with the original Mini-Minor car (also celebrating 60 years) or the latest version Mini brought in especially for the occasion whilst Reception drinks were served. The evening was hugely successful and most enjoyable: good food with wines from around the globe, all enhanced by Comedian/Pianist Kev Orkian who had everyone in tears of laughter.

During the course of the evening a raffle was held in aid of the Chaîne GB’s chosen charity, The Clink. The aim of the Clink Charity is to reduce reoffending rates of ex-offenders by training prisoners and placing graduates in employment in the hospitality and horticultural industries.Finally, the hotel General Manager, Officer Maître Hôtelier Sally Beck received the applause of the diners on behalf of the hotel team.

There were two options available for Sunday. For some, their choice was a Champagne Tea in the Crystal Moon Lounge at the Corinthia Hotel. The name of the room comes from the 1000-piece Baccarat crystal chandelier which hangs in the centre of the room. Huge displays of treats were wheeled around on gilded trolleys for guests to make their own selections. The tea had its own dedicated station manned by a tea sommelier who weighed and infused the selected brew to perfection. The second choice available was a Celebration of English Cheese & Wines lead by Cheesemaster, Tom Badcock of Harvey & Brockless with 15 cheeses matched to perfection by superb modern English wines. Tom took the crowd on an 8,000 year journey from the very beginnings of cheese to the present day with great knowledge and an acerbic wit. This informal session was so enjoyable that it ran overtime, much to the pleasure of all. Bravo to Tom and also Salvatore who introduced the wines. Perhaps the most exciting event of the Chapitre took place on the Sunday evening with a once-in-a-lifetime private visit to the Tower of London. Once the public had left for the day, a private guided tour was led by warders (Beefeaters) in their splendid uniforms. This included a much-anticipated viewing of the famous Crown Jewels.

A group photograph was taken in front of Tower Bridge before members climbed the 70 steps, through the armouries, to the top floor of the famous, 1000 year-old White Tower. After the drinks reception, guests sat down to an impressive four course dinner prepared by The Foodshow, founded by Officier Maître Restaurateur, Andrew Gosling. The menu was designed and executed by Maître Rôtisseur, Max Uyanik, and served with matching wines.

In order for this dinner to take place two things were necessary. Firstly, Laura Drake, Marketing Manager for the Tower, graciously donated the building for the evening. Secondly, everything needed for the evening had to be imported and many hands were required to carry all the furniture, lighting and accoutrements up the 70 steps and to dismantle it all afterwards. As there were no kitchen facilities, it was also necessary for the food to be prepared off-site and brought to the Tower in time for the dinner. An amazing display of co-ordination and perfect timing. During the course of the evening diners were ‘locked in’ and entertained with stories by a warder during the Closing of the Tower Ceremony. This ceremony had taken place every day, unbroken for hundreds of years – even through the Blitz. A superb conclusion to an exceptional, 60 year celebration with many new friends made and happy memories to savour.

Our sincere thanks to the whole team that made all this possible. Particular thanks go to Andy Kemp and Andrew Roberts of Bidfood, for their wholehearted support of the event. 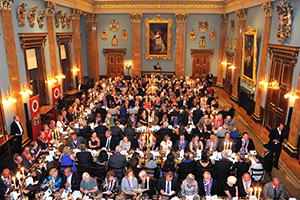 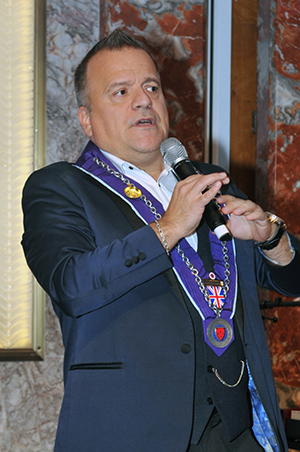 Kev Orkian at the Gala Dinner 2019 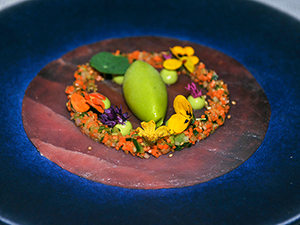 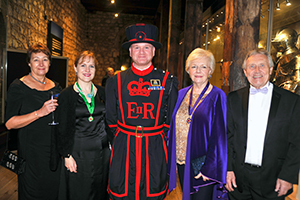