The first guests arrived in Bristol on a Thursday evening, for a weekend that reflected Bristol’s maritime connections, and were welcomed to a fun dinner in the Filini Restaurant of the Radisson Blu Hotel by Maître Hotelier Christopher Peach.

Next morning, some of our overseas guests set off to explore the Roman city of Bath under the guidance of Mike Rowland, a Blue Badge West Country Guide, while a large group walked the short distance to the cellars of Averys wine merchants. These brick-arched wine cellars have been used since the founding of Averys back in 1793. Mimi Avery, Brand Ambassador, took us through a tasting of Riesling from around the globe. This writer’s favourite was the FX Pilcher Smargard from Wachau in Austria.

Friday’s dinner was on board the SS Great Britain, a world first when she was launched in Bristol in 1843. This uniquely successful ship design brought together new technologies in a way which transformed world travel. Isambard Kingdom Brunel, the most daring of the great Victorian engineers, conceived the groundbreaking combination of a screw propeller, an iron hull, and a massive 1000-horsepower steam engine.

We strolled around this very interesting ship and got a feel for travel 150 years ago, taking drinks on the Promenade Deck before having the unique experience of a superb dinner served in the First Class Dining Room. Dinner was preceded by a very informative introduction to the ship and its history by Bob Evans, the Ship’s Historian.

On a sunny Saturday morning, our induction ceremony took place in the Palm Court of the Marriott Grand Hotel with Rene Kamber, Bailli Délégué of Switzerland and Member of the Conseil Magistral, as Inducting Officer.

Some members then visited Tyntesfield, a spectacular Victorian Gothic revival country house with gardens and parkland, the home of one of England’s richest commoners, William Gibbs, who built his fortune on fertiliser. Spiralling turrets and pinnacles adorn the roof, ornate stone carvings and church-like windows complete the Gothic look, giving the feel of a mysterious, fairytale mansion. Terraced lawns give way to spacious parkland scattered with hundreds of trees collected by the family, and a glorious walled kitchen garden beyond. This is probably the only house of this period that has been preserved in its original state.

Other members took a tour of the city, again under the guidance of Mike Rowland who filled the tour with some wonderful anecdotes and great humour. The tour included the Cathedral, the historic Harbourside, King Street, the Theatre Royal, and St Mary Redcliffe – said to be the fairest parish church in the country – and then to Brunel’s Temple Meads and, after, the Downs.

Then a walk across Brunel’s Clifton Suspension Bridge, one of the crowning achievements of Isambard Kingdom Brunel’s engineering genius. He died aged only 53, in 1859, but the Bridge was completed as his memorial and finally opened in 1864. Designed in the early 19th century for light horse-drawn traffic, it still meets the demands of 21st century commuter traffic with about 12,000 motor vehicles crossing it every day. That evening our Gala dinner was held in the ballroom of the Marriot Grand Hotel and was prepared by Maître Rôtisseur Martyn Watkins and his team. This was a spectacular event with the room wonderfully decorated in autumn colours by Frances Griffiths and her team.

During the evening, Bronze medals were presented to VCA Ted Kendall from Yorkshire and VCM Norman Wallage from Wessex, to recognise their outstanding contributions to the Chaîne. Mention should also be made of the raffle in support of our charity ‘The Clink’, with Maître Restaurateur Chris Moore, CEO, giving us an update on the charity’s plans, including the opening the previous month of their second restaurant. The contributions made that evening bring the total contributions made by Chaîne members for the year to over £12,000.

A leisurely breakfast or massage were the choice of many the next morning before setting out on a boat trip of the historic harbourside aboard the Bagheera, an Amsterdam-style boat, for a leisurely five mile guided trip around Bristol’s floating harbour in the heart of the city; fascinating for its history, industrial archaeology, Brunel association and modern redevelopment.

Our Grand Chapitre came to an end with a Farewell Lunch at the Bordeaux Quay overlooking the harbour and with great warmth members took their leave of their friends with the promise to meet again in London for the 2013 Grand Chapitre. 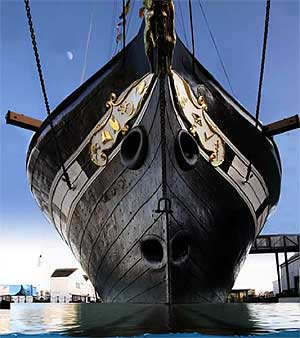