The Chaîne des Rôtisseurs Bailliage de Grande Bretagne organises a number of national and local events, including gala occasions such as ‘Grand Chapitres’ and ‘Chapitres’. Please see below the most up-to-date listing of these events.

For listings of Events by region, visit the Bailliages section of the website.

Young Professionals dinner at the Dorchester

Help support our young professionals at this prestigious venue

A dinner at this beautiful country hotel preceded by the AGM

Lunch at the Miller of Mansfield in Goring

The Miller of Mansfield is a favourite of many of our members, we have held a number of dinners historically however this is the first time they have hosted a lunch for us. It is amazing to think that this is nearly the 6th Birthday of the Miller… We are really looking forward to the lunch so lets kick off our year with hopefully a sell out for the award winning The Miller of Mansfield. The fine collection of awards that the husband and wife team Nick and Mary Galer have built up in recent years include: Sawday’s Newcomer of the year and Top 50 Gastro pub, Front of House Runner up, Michelin plate and 2AA rosettes

AGM & Dinner at The Earl of March

Our AGM will be held at The Earl of March on 29th January. Details here and on the Solent Bailliage web site.

Lunch at The New Club, Edinburgh

In Anglia we think it’s very important to have an annual event at a catering college. For this event we are planning to go to Hitchin College. The premises are brand new so exciting times ahead. More details to follow.

A rare opportunity to enjoy an a la carte menu at London’s best-kept secret, Oslo Court.

A special invitation for a black-tie dinner at this private club.

Dinner at the Devonshire Arms.

Lunch at the Dysart in Petersham

A joint Wessex event with the South West Bailliage

A joint Dinner with Wessex Bailliage at Summer Lodge, Evershott

Lunch at The Angel

Lunch at The Angel in Dartmouth

Wessex Lunch at The Elderflower, Lymington

Lunch at this unique restaurant situated on The Quay, right in the heart of Lymington.

Join us at Kinghams in Shere

A return to an old favourite of Thames Valley members

English wines at The Grand

Celebrating English wines month, local wine makers will collaborate at The Grand Brighton to match wines to a dinner prepared by Alan White and his team.

OMGD Winemaker Dinner in London with the top Veneto producer Allegrini i hosted by the owner Marilisa Allegrini. The family have been producing wines in their Fumane estate since the sixteenth century. Their prize winning Palacio del Torre, La Griola and La Poja are highly appreciated and collected. We are back again in the Lanesborough Hotel which is always a superb occasion.

Trip runs from 2 to 11 June exploring the delights of Sicily. SOLD OUT

Is it Wagyu or Wangus?

This intriguing innovation has resulted in a world class restaurant called The Grill by HW on the outskirts of Bridge of Allan where east meets west in the beef stakes.

Tasting Menu at The Angel@Hetton.

Dinner amongst the Vines of this beautiful English wine maker

Lobster, Steak and Champagne for Yorkshire Day at Grantley Hall

Ladies only at The Wykeham Arms, Winchester

Join us for an exclusive private lunch at Guards Polo Club at Smiths Lawn, Windsor prepared by the Mosimann team. This will be followed by an exciting championship game of Polo and finally a leisurely afternoon tea.

Wessex Lunch at The Priory, Wareham

Lunch in the beautiful setting of this Pride of Britain Hotel

Exclusive use of Murmur for a lunch prepared by Michael Bremner, followed by a talk from Michael about his career and journey. Option to stay at Grand Brighton with tour of Ridgeview on Saturday morning 12th September

Lunch & an Aria or two!! West Green House in Hook

A new location for us that many of you will know

Orkney, also known as the Orkney Islands, is an archipelago in the Northern Isles of Scotland, situated off the north coast of the isle of Great Britain. Orkney is 10 miles north of the coast of Caithness and comprises approximately 70 islands, of which 20 are inhabited. The largest island, Mainland, is often referred to as "the Mainland", and has an area of 523 square kilometres, making it the sixth-largest Scottish island and the tenth-largest island in the British Isles. The largest settlement and administrative centre is Kirkwall

Lunch. Another picturesque hotel in the Northern part of our Bailliage

Dinner in Watership Down territory

A return to the fabulous Exeter Cookery School for lunch and a cookery demonstration.

This fundraiser brings 5 of Brighton’s best chefs together at The Grand to cook for charity. DATE TBC

Dinner at the Chichester Harbour Hotel

Our 62nd Grand Chapitre will be held in the Oxford, ‘City of dreaming spires’, between 30 September and 3 October 2021

Visit the Events Archive for more information on previous events. 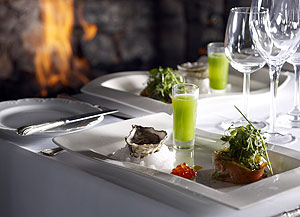