It was a glittering night in the spectacular setting of the Dorchester Hotel’s Orchid Room at the end of March, when the Chaîne gathered to honour the winners of this year’s Chaîne des Rôtisseurs’ Young Professionals 2018 competitions, and to find out who would be representing Great Britain in the International Finals in September

These rising stars and 2018 finalists — four sommeliers and three chefs — waited nervously for the results. They had all been tested on skills and creativity, knowledge and ability earlier that month, in front of panels of respected industry judges. They all knew they had been placed — which was why they were at The Dorchester — but in which order?

It was not long before they found out. In front of the audience, which included top names in the hospitality world, Awards judges, media guests and sponsors, Exeter-born Kayla Tuvey, aged 19, currently working as commis chef at the Deer Park Country House Hotel, Honiton, Devon, became the youngest and the first woman ever to win the title of Chaîne des Rôtisseurs GB Young Chef of the Year.

This very popular winner will now start training for her chance at the world titles in Mexico City (Sommeliers) in the autumn. Kayla will have the benefit of stages at The Royal Lancaster Hotel, Anton Mossiman’s private members club in Knightsbridge, and a week in one of Holland’s top Michelin-starred hotels, De Bloemenbeek.

Commenting on her title, Kayla said: ‘It is absolutely amazing — I still can’t really believe it! It is a very great honour to represent my country in Taiwan, and it will be even more special as it falls on my twentieth birthday!’

Kayla fought off stiff competition this year from her rivals. In the Chef competition — which this year took place in the cookery school kitchens at Lainston House, Winchester — Ibrahim Ahmad of the Royal Lancaster Hotel, London came an equally close second, while Zak Boudreaux of Chewton Glen, Hampshire took third place.

At the dinner, Philip Evins, Bailli Délégué, paid tribute to Chaîne GB’s partners whose support makes these competitions possible, also to the teams who give their time and skills to organising and judging the events. He also congratulated all the contestants and in particular the winners of this year’s Awards.

He said: ‘The young talent that we have in the UK has never been stronger, and we believe it vital that the Chaîne supports the development of skills and techniques that help us ‘futureproof’ the hospitality industry and, as consumers — and, of course, our own Chaîne’ members — look for new inspiration and culinary experiences.

‘Our annual Young Professionals Awards have been developed to support rising young stars and give them a platform to showcase their skill and passion for the industry. However, it also goes beyond this; it gives them the chance to compete against their international peers — a hugely beneficial learning experience that will help allow them to maintain a profile on a global stage throughout their career and support their broader development.’ 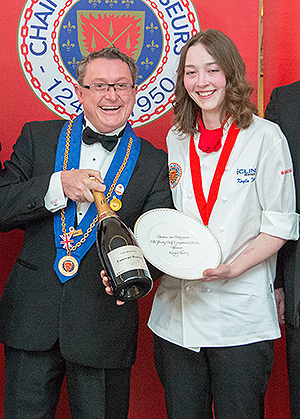 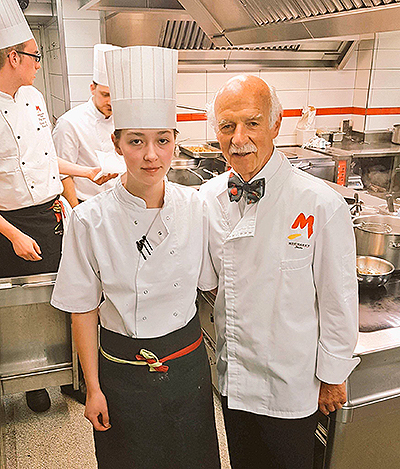 Kayla during her stage with Officier Maître Rôtisseur Anton Mosimann