Nowhere could be more fitting than the Orchid Room at The Dorchester, which provided a spectacular backdrop, to honour the young rising stars across the Chaîne’s professional membership at this year’s Chaîne des Rôtisseurs’ Young Professionals 2017 contests.

The glittering awards ceremony was hosted at the end of March to announce the winners of the UK Young Chef and Young Sommelier Awards 2017, and select those who will go forward to represent Great Britain in the International Finals this autumn.

With top names in hospitality attending the Awards — alongside media guests, judges, and supporting Chaîne’ members — this year saw 24-year-old George Marsh, who is Sous Chef at Swinton Park, near Ripon in North Yorkshire, scoop the title of the Chaîne des Rôtisseurs UK Young Chef of the Year 2017.

George, who in his role as Sous Chef, oversees a team of 11 at the busy 3 Red-Rosette starred, Swinton Park, will now go through to the International Finals 2017 which take place in Frankfurt on 8 September. The International Finals see the top Chaîne talent from all over the world compete for the ultimate slots.

George fought off stiff competition this year from their rivals. Coming a close second in the Young Chefs contest — also from Yorkshire — was Luke Sanderson of the Grand York Hotel (age 21), with Pawel Sowa of The Vineyard, Stockcross (age 26) placed third. Luke, in second place, was the highest placed entrant under 23 and will go forward to represent the Chaîne des Rôtisseurs’ at the Craft Guild of Chefs Young Chef of the Year competition on the 6 June 2017.

Philip Evins, Bailli Délégué, paid tribute to The Dorchester’s immense skill in providing a menu of incredible standard to so many individuals and congratulated all the contestants and, in particular, the winners of this year’s Awards. He said: ‘The young talent that we have in the UK has never been stronger, and we believe it vital that the Chaîne supports the development of skills and techniques that help us ‘future-proof’ the hospitality industry as consumers — and of course, our own Chaîne members look for new inspiration and culinary experiences.

Our annual Young Professionals Awards have been developed to support rising young stars and give them a platform to showcase their skill and passion for the industry. However, it also goes beyond this; it gives them the chance to compete against their international peers — a hugely beneficial learning experience that will help allow them to maintain a profile on a global stage throughout their career and support their broader development.’

Philip thanked Vic Laws in his role of Culinaire for his tireless dedication in managing the Young Chefs’ contest alongside this year’s judges who selflessly give their time and expertise to the contest and included: Paul Wright, Daniel Galmiche, Daniel Ayton and Ben Purton.

Philip also thanked the sponsors who make it all possible, including headline partners Gaggenau and Bidfood, together with associate partners and prize donors Zwiesel, Food & Travel Magazine and Difference Coffee Company, along with supporting prize donors Bragard, Mosimanns, Wusthof, and Chateau Musar. He also thanked food giant Unilever for the use of their renowned development kitchens in Leatherhead. 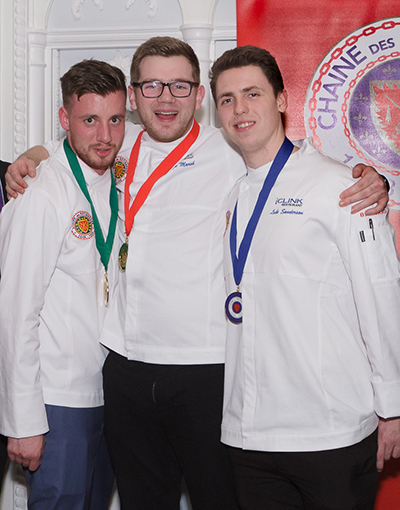