The winners of our Young Professionals Competitions were revealed at a glittering ceremony at the prestigious Dorchester Hotel in London in March. This was an occasion for us all to celebrate the talents, enthusiasm and desire for learning of the up and coming young people in our member establisments. Maître Hotelier Roland Fasel the Managing Director of the hotel always ensures that the evening goes off without a hitch.

The evening started with Bob Cotton, previously CEO of the British Hospitality Association (BHA), giving, in a keynote address, some challenges to the industry partipants on three major areas he felt they should focus on during 2015.

Taking the top accolade of Young Chef of the Year was Joe Gould of the Lainston House Hotel, Winchester (Wessex).

The Young Chef finals were held two weeks before in the Kitchens of Unilever in Leatherhead under the direction of Conseiller Culinaire Vic Laws. As always, this involved creating a three course menu for four people out of a previously undisclosed box of ingredients, in just three hours. The judging team was lead by Officier Maître Rôtisseur Daniel Galmiche, Exec Chef of the Vineyard at Stockcross, assisted by Danile Ayton, Exec Sous Chef at St James Hotel in London and Paul Wright, Development Chef for Unilever. The three top-placed contestants from the cook-off were invited to the Awards Dinner where they would learn their final placing.

Chairman of judges, Daniel Galmiche, praised the ‘quality and creativity’ of the contestants and emphasised how important it is to give young talent a competitive forum, from which they can grow and develop. Narrowly missing out in the extremely close competition was runner up Jordan Kerridge from South Lodge Hotel, Horsham (London City), with Matthew Jennett from Manoir aux Quat’Saisons, Oxford (Thames Valley) taking third place.

Prizes for the Young Chef of the Year included knives from Wusthof, a residency at the Mosimanns Club thanks to Officier Maître Rotisseur Anton Mosimann, plus a week’s residency at the two starred Michelin hotel and restaurant at the enchanting Schlosshotel Lerbach at Bergisch Gladbach, one of the best luxury hotels in Germany, under chef Maître Rôtisseur Nils Henkel, a gift of Gaggenau. 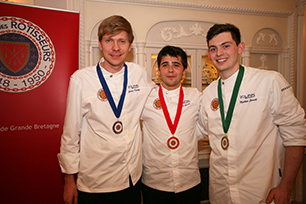