Le Cordon Bleu is a name synonymous with the most comprehensive high quality teaching of French culinary techniques in the education field. Le Cordon Bleu encompasses over 30 international schools in 15 countries (North America, Latin America, Asia, Australia, the Middle East and Europe). For more than a century Le Cordon Bleu has offered a comprehensive programme based on French culinary techniques. Since 1992, Le Cordon Bleu has also offered business certificates and diplomas in restaurant, hotel and tourism management. Among these programs are Bachelors and MBA’s including “on line” courses and a Masters of Arts in Gastronomy.

The President of Cordon Bleu Andre Cointreau is a member of La Chaîne des Rotisseurs’ Conseil d’Honneur and a Chevalier d’Honneur, a title only bestowed upon those who are most prominent and respected in their fields. 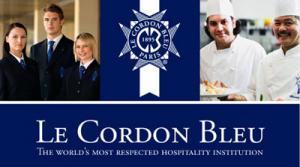