Events > Past Events > Dinner at The Dean Inn, East Dean

Chef Michael di Belli is our host for the evening at this country pub where we shall enjoy exclusivity of their restaurant. Michael has created a tasting menu which I am confident will be a delight. Michael’s career to date includes stints at Ockenden Manor (when it had its Michelin Star) and he won the national 2016 Hospitality Training Chef of the Year award for apprentices which resulted in him staging at Pollen Street Social under Jason Atherton and Fera at Claridge’s under Simon Rogan. He has also worked at award winning pub The Coach & Horses in Danehill.

Michael is just one of four chefs nationwide to have reached the final of the Parliamentary Pub Chef of the Year competition being held next week on 24th January. We wish him well and hope to be celebrating his win, but in any event, a great credit to be in the final. There are very well appointed rooms, available at £90 per night (dual occupancy including breakfast) at the time of writing, so do consider a stay over if coming from a distance.

Full details can be found on the Solent Bailliage web site.

This event is from the Solent Bailliage, see more Solent Events. 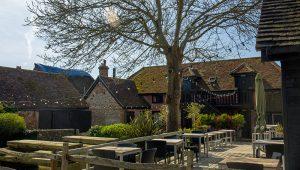