Lime Wood, a boutique country house hotel, is set in the heart of the New Forest National Park, 1.5 miles from the small town of Lyndhurst and just

The original building was a Regency country manor house and was originally established as a hunting lodge in the 13th Century. Today the interiors are pure laid-back luxury - relaxed but not without attention to detail and the odd eccentric touch. The grounds are in a natural setting with extensive, restored gardens and grounds adjoining both forest and parkland. Luke Holder and Angela Hartnett Accommodation: 17 suites and 15 bedrooms Guest Rooms: - Many with private gardens or private balconies looking into the forest an hour and a half drive from London. Hartnett Holder & Co is a relaxed, stylish and comfortable upscale restaurant - full of character, yet unpretentious. Angela Hartnett and Lime Wood’s Luke Holder, with their team, create locally sourced Italian dishes with a respectful nod to the seasons and to Italian culinary ideologies.

Dining: Hartnett and Holder’s food comes with the much loved Italian approach to eating - where sharing and provenance is everything. The style is chefs’ home-cooked food not chefs’ food cooked for restaurants. Both Angela and Luke are famed for their informal, grounded style of cooking and their respect for local produce.

Angela Hartnett is one of the most high-profile female chefs in the restaurant world. Angela worked under Gordon Ramsay at Aubergine, and then under Marcus Wareing where she soon became Head Chef at Pétrus. In 2004 she gained her first Michelin star. In 2008 she launched Murano in Mayfair.

Luke Holder worked in some of London’s busiest and most exclusive restaurants including Orrery, The Sloane Club, and the Oxo Tower on the South Bank. Luke then spent a year cooking in the Italian kitchen of Enoteca Pinchiorri, 3 Michelin stars, in the heart of Tuscany, Florence - this experience ultimately changed his philosophy on food forever and firmly placed his focus on cooking locally and seasonally, at the highest level

Expect a menu of Italian influenced forest dishes, pulling together both Chefs much admired signature styles, which will remain constant and other dishes on the menu will change daily with forest and seasonality being the driver. 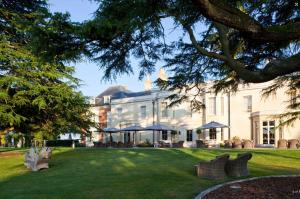