There has been a house on the site since the 18th century, allegedly built on the site of a Danish encampment (hence “Danes-field”). The current house has been there since 1900 and is set on a magnificent 65 acre site, high in the Chiltern Hills and overlooking the River Thames. The hotel has a total of 87 rooms and suites and is a stunning venue for events and weddings, it most recently hosted the wedding of film star George Clooney

Dining at Danesfield House is run by Executive Head Chef Billy Reid who turns simple ingredients into well executed modern British food served in the surroundings of the Oak Room, the Orangery and in the warmer months outside on the sun-drenched terrace. 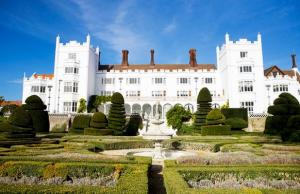