To celebrate World Chaine Day 2020 we were invited to join a wonderful cooking demo of Spanish food by the critically acclaimed Bristol-based Chef, Freddy Bird, streamed by Zoom in the comfort of our own homes.

South West born Freddy trained in Ballymaloe, then with his wife Nessa, ate his way around the Mediterranean and Spain before starting his career in London at the Two Michelin starred The Square with Philip Howard. This was followed by a period at Moro working with Sam and Sam Clark. He returned to Bristol in 2008 and the opening of the Lido as Executive Chef. Again, he was Exec Chef at the opening of The Lido in Reading in 2018. Last year Freddy and Nessa ventured out on their own, opening the Little French restaurant in the Clifton area of Bristol He has appeared on TV in Saturday Kitchen, in Sunday Brunch, with the Hairy Bikers and as a co-presenter with Michel Roux Jnr in Hidden Restaurants.

For the demo Freddy cooked Rack of Pyrenean Lamb, Patatas a lo Probre and Gambas Blanca.
Some 30-40 members watched intently as Freddy showed us how to cook a perfect rack of lamb with the potatoes (not sure, I but think ‘probre’ might mean tasty – they certainly looked tasty)! Then those wonderful prawns, again with tips on how to cook them to perfection. All our mouths were watering as we gazed upon delicious-looking dishes of food. Only the smell was missing.

Freddy’s products were supplied by Mevalco, a leading specialist Spanish importer which has strong links back to Chaine’ members Justin Slawson and Caroline Hole-Jones. Mevalco currently supplies over a dozen Michelin chefs across the UK as well as the best Spanish restaurants in the country. The company offers Chaine’ Members the opportunity to purchase some fabulous products at near trade prices. www.mevalco.com.

The presentation ended with the opportunity to ask questions and discuss with fellow members live on the call. An interesting and fun way to pass an isolated evening! Janet Evins

This news item is from the Wessex Bailliage, see more Wessex News. 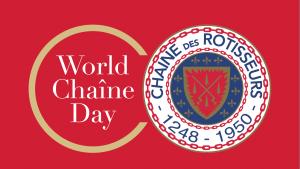