Charming Frenchman Daniel Galmiche has all the characteristics of a successful chef; intensity, passion and fiery ambition! He has been described as "the champion of classic cooking with a contemporary twist".

Daniel draws upon his unique experience and passion to share his love of food and authentic French/Mediterranean cooking and is passionate about using ingredients from local and sustainable sources.

He is a regular guest chef on BBC 1’s Saturday Kitchen, and on ITV with James Martin in Saturday Morning. He has written a regular column for various publications as well as his first book, “The French Brasserie Cookbook”, published with success in September 2011, and now selling in 11 countries and in 5 languages. His second book, “Revolutionary French Cooking” was published May 2014 and his third, launched in May 2021, is “French Countryside Cooking".

His career has taken him all over the world including the UK, Sweden, Portugal, and Singapore. In London he worked at the highly acclaimed Le Gavroche under the tutelage of Michel Roux. Then in the two-star restaurant Schillinger in Colmar, a spell in three-star Marc Meneau in Veselay, and two-star Hostellerie du Chateau Servin. In Scotland, Daniel was awarded Master Chef of the Year, gaining his first Michelin star in 1990 whilst working at Knockinaam Lodge. He was also awarded a Michelin Star at Harvey’s in Bristol where he was Chef/Manager, and maintained the Michelin Star at L’Ortolan near Reading and again at the magnificent Cliveden House in Berkshire. He was at the helm of the famous Relais et Chateau restaurant “The Vineyard” at Stockcross from 2009 until 2016.

He is currently an ambassador for the Norwegian Seafood council and is a member of the Chaine Des Rotisseurs and currently chairman of judges for UK Young Chef competition, and a world Advisory Board member.

Health conscious, Daniel loves sport almost as much as he loves cooking. He regularly plays badminton and walks in nature.

Daniel is available for consultation, education, speaking and demonstration cooking. 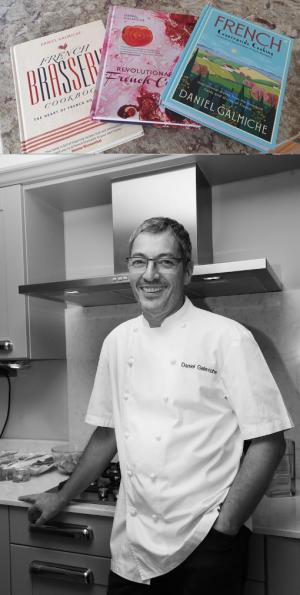 Daniel will waive the post and packing on any of his books, which he will sign if ordered directly from him. He is willing to answer Chaine member questions about cooking if he is emailed on daneilgalmiche@hotmail.com.