Members and visitors are encouraged to patronise these vineyards and merchants. You will be assured of a warm welcome and member pricing. When you do so, please let the staff know that you are a member of the Chaîne, or if a visitor, that you found them through the Bailliage de Grande Bretagne website.

The professional members of the Chaîne des Rôtisseurs can now be located by using this map-based search engine.

After a career in the Army of nearly twenty years, finishing at the Ministry of Defence, Julian joined the wine trade. He actually started his first wine company in 1978 before leaving the Army and he added a second company, wholesaling fine wines in 1980. These companies were sold to a public company in 1982 and he was the Group Managing Director for two years until 1984. During this time he acquired a number of exclusive French wine agencies. After some 8 years in the wholesale wine trade he sold up his remaining interests and is now an agent here in the UK for some forty-five Châteaux and Domaines (JULIAN WHITE AGENCIES) He has travelled to most of the world’s wine-producing regions, but remains a specialist in Champagne, Burgundy, Rhône and Bordeaux. He was, from 1999-2013 the British Ambassador of the Confrérie du Sabre d’Or, the Champagne Order devoted to the promotion of Champagne by continuing the tradition of the Art of Sabrage. He is now Ambassador Emeritus of the Sabre d’Or. He also lectures on and directs tours of Champagne, Burgundy, the Loire and Bordeaux.

During the last 16 years he has conducted some nine tours of Champagne, three of which were combined with Burgundy. He holds an Annual Tasting in May with Philippe Brugnon, his principal from Rilly-la-Montagne. Usually once a year he runs a tutorial champagne dinner showing a wide range of Champagnes, both Houses and Growers, demonstrating the variety of styles, cuvées and the effect of vintages. His annual wine tastings also include Burgundy and the Rhône.

He is also an Officier of l’Ordre des Côteaux and a Professionel du Vin in La Chaîne des Rôtisseurs. He is a Freeman of the City of London

CV- Pre 1979 Julian was commissioned from Sandhurst in 1962 into The Kings Regiment and posted to the 1st Bn in Berlin, at that time very much under the cloud of cold war politics. After British Guiana, Northern Ireland Command and a tour as ADC to the Colonel of the Regiment, Julian went to the Far East to be a Company Commander in the 6th Queen Elizabeth’s Own Gurkha Rifles during the ‘Red Book revolution Maoist’ days in Hong Kong.

He returned to The Kings as Adjutant when the Regiment was part of 11th Armoured Brigade in Germany and then in Ulster during Operation Motorman in Belfast and later to return to Hong Kong as a Company Commander of the 1st Bn. He went to the Staff College, Camberley in 1975 and thence to the MoD and was responsible for the Professionals Campaign” in Army TV and Press Advertising 1976-1979, after which he retired.

Supplier of the following wines 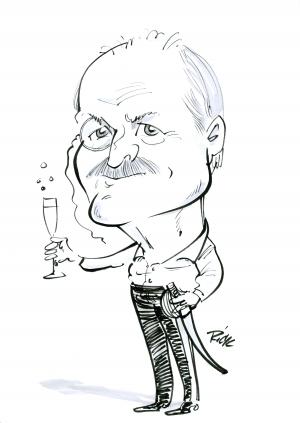