Again, The Dorchester was the venue for Chaîne GB’s annual Young Professionals’ Awards Dinner in 2019 and the team really did us proud with effortless organisation and service, together with a superb dinner! Guests from the Press, our partners, and supporters of all of the competitors, joined together with members in an exciting evening.

Dinner started with Cornish brown crab salad matched with Sauska, Cuvee 113. This was followed by a totally unctuous chicken, wild mushroom and black truffle ravioli matched with Castello della Sala, San Giovanni Orvieto. The miso-glazed turbot that followed completely wowed the diners and was accompanied by a beautifully soft Chardonnay from Woodlands in Margaret River. Meat lovers were then treated to a 60-day Himalayan salt aged fillet of beef together with Masi Tupungato, Passo Doble.

The 2019 winner of our Young Chef Competition was Jordon Powell from South Lodge Hotel in Horsham in Sussex Bailliage. The hotel has a great track record of mentoring young staff with three winners of this competition in recent years. Second was Ben Emmerson, from Mosimann’s in London, and third Ben Whyte, from The Priory Hotel in Wareham, Wessex Bailliage.

‘This is a fantastic result as I was up against very stiff competition’ said Jordon afterwards. ‘But chef contests have always been an important part in my career. I love them, and am very excited to be going to Canada in September, to represent Great Britain.’

Jordon will have a mentoring programme to help him prepare to represent Chaîne GB in the International Finals in September, in Calgary. We wish him every success as he prepares to take on the world…

Finally, something completely new for these events was the awarding of the inaugural Gerard Basset Tasting Trophy, in memory of a much-loved Chaîne member and friend. Gerard was known throughout Britain as the Sommelier’s Sommelier. For many years he was both National Echanson and Chairman of Judges for the Chaîne competition, and was always admired for his compendious knowledge, wonderful tasting ability and skilful mentoring of very many young sommeliers. This trophy was awarded to the competitor in the Young Sommelier Competition attaining the highest score in the blind tasting and food matching sections. We were all delighted that his widow, Nina Basset, together with son Romané, was with us to present this special award to a very worthy Paul Fauvel of the Lanesborough Hotel from London City. Paul is the first competitor in the history of the competition to identify all the wines correctly. Bravo! 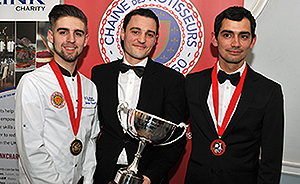