The Dorchester Hotel on Park Lane was again the venue for Chaîne GB’s annual event to celebrate young talent in the industry. Members from across the country — including many professionals, together with the press — assembled to both recognise and support these young professionals and also to enjoy a wonderful dinner created by Executive Chef Henri Brosi produced on the night under the guidance of Executive Sous Chef Roger Olson.

Bailli Délégué Philip Evins welcomed everybody, particularly our partners, and thanked them for their continuing support which makes it possible to stage the two competitions for young chefs and young sommeliers.

The evening’s keynote speaker was Maître Hotelier Roland Fasel, GB Director for the Dorchester Collection and General Manager of the Hotel, who spoke to the importance of training and retaining talent. Many at the dinner were envious of the long list of facilities provided to Dorchester staff — volunteering to test the spa, the gym, etc.

Jordan Kerridge of South Lodge Hotel (London City) was crowned the Young Chef of the Year. Jordan said ‘I’m absolutely delighted to have won the GB title! It’s taken a lot of hard work to get here but I am so pleased all my training has paid off. I’m now really looking forward to making my country proud when I represent it in the International Competition later this year in Manchester.’

Philip Evins added: ‘I would especially like to congratulate Jordan, who was up against some very talented competitors. It is pleasing to see competitors trying again to take top place. The winning candidates improved on their previous entries showing their learning through the year. It is always daunting to have to perform in a competitive environment but he held his own and thoroughly deserves his winning position. We wish Jordan the best of luck in his challenge for top international honours later in the year.’

As is customary at these dinners, members were pleased to hear the latest news and successes from The Clink including their expansion plans from CEO, Maître Restaurateur Chris Moore. The additional restaurants over the next couple of years will give even more Regional Bailliages the opportunity to be linked with and support a local Clink restaurant. This was followed by a raffle which raised a four figure sum for the charity. 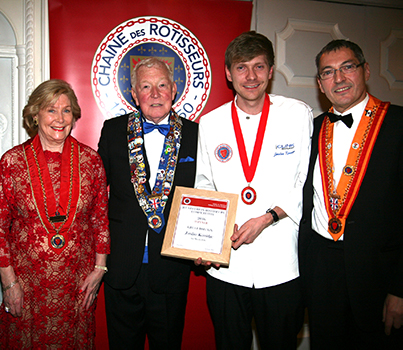